Our youngest entered the cattle show arena not quite two years ago.  She did awesome.  We bought her a pretty decent calf with the intention that it would be a great starter heifer for her - a gentle calf she could easily work with.  We were going to really focus on showmanship with her that first year.

She won.  She won a LOT.  She won a lot of her classes, a lot of divisions, some breed championships, and the girl held her own in those showmanship competitions, too.  I'm sure a lot of people wondered where the heck this little red headed girl came from and maybe a lot of them chalked it up to beginner's luck.  I may have been guilty of contributing more than I should have to luck, myself!  Today as I looked back at facebook memories, though, I realized it wasn't really as "lucky" as it might have seemed.

This little red headed girl who walked on the show scene almost two years ago dragging around her matching Hereford literally cut her teeth in a barn!  She was in a pack and play at livestock shows as a baby.  As a preschooler I was concerned about how much time she spent in the barn with her brother's, sister's and cousins' cattle projects, so I put a desk in there for her to play and color while we worked.  She started practicing leading heifers around at about 3 years old.  She was "helping" work hair at that age, too.   We have a video of her trying to help clean out a stall at barely two. 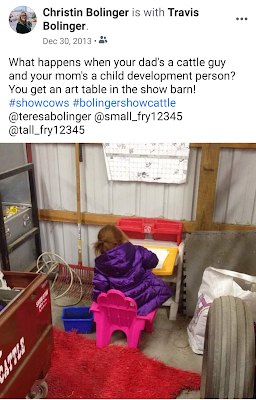 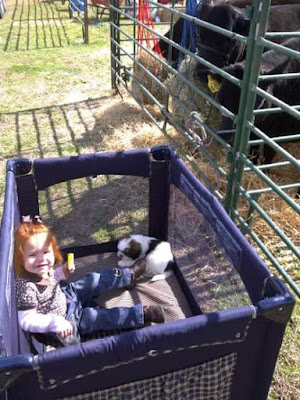 She has been dying to get in a show ring since she could walk.  She's been watching her older siblings and counting down the years until she could do what she's been watching them do.  And, boy she must have really been watching close!  She's had her eye on the Hereford breed since her older cousin started showing them about 8 years ago, and her uncle started promising her she would get to show one someday.  We FORCED her to show pigs her first two 4-H eligible years so she would not be in competition with her cousin and by our Regional show that last year of her showing pigs she was begging, "Can't I just show a heifer now??"  She may have done a lot of winning in that first year of showing cattle, but she had learned how to take a loss pretty well in the two years before that.

It is funny the things we never see outside the ring.  The calves look pretty and the kids are walking them into place.  You never see things like kids busting ice in the freezing cold instead of just having a snow day, rinsing calves twice a day during Summer vacation, skipping social activities because they have to help with livestock chores, or choosing to quit sports so they can focus on their show career.  You see that new girl waltz in the ring like she has been doing it for years and you don't realize she actually has!  It has just been happening outside the show ring.

You get to see a little piece of the puzzle when you are watching these livestock shows, with the spotlight on and the loud speaker buzzing.  But, the parts that really count - the things that make this showing stuff really, really great mostly happen outside the ring.