Last night I watched my almost sixteen year old boy loading up his stock trailer for an upcoming show.  Of course, I took pictures because that is what I do.  I obsessively take pictures of everything because I want to hold on to every memory of my children's childhoods.  The thing is, how often do I really go back and look at those pictures?  I don't really need to because I have so many beautiful pictures of them in my own memory.

When I think about our Bubba as a little boy, I picture him in the floor with his play farm set.  He would spend hours upon hours just setting up the different pastures, loading and unloading his toy trailer, and hauling things from one spot to another.  He would park all his trucks in neat little rows and he would tell us all about how he would someday set up his future farm.

From about 2 years old this kid was his Daddy's shadow.  I can remember my husband loading him up in his car seat and taking him to work cattle.  The boy was obsessed with all things trucks, equipment, and cattle.  He rarely ever "played."  To him, all his play was really work.  On a weekend morning he would wake up, put on his "work jeans" (the cutest little Wranglers you've ever seen with the elastic waist!), "work boots," a tucked in t-shirt, a belt, and a ball cap.  He would tell me he was going outside to work and he would go to the little dirt section of our yard by a storage shed to move his trucks and tractor around for hours and occasionally get on his toy riding tractor to do some dirt work. 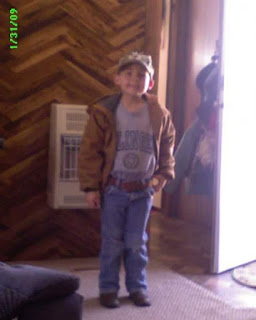 As I look back at the pictures I took of my boy loading his real show trailer last night it hits me how much like a man he is looking now.  His once chubby little fingers that played with my hair every night are now big, strong hands that maneuver his heavy equipment around inside the aluminum walls to ensure everything is loaded perfectly and tied down for the ride.  The little boy who used to look up at me and tell me he was going outside "to work" is now towering above me.  Those little elastic waist band Wranglers have grown into jeans too long to fit on my ironing board and he now requests the heavy starched look only the dry cleaners can achieve. That kid I used to carry around on my hip is now carrying around things I couldn't possibly lift on my own.  The boy who used to push his toy trucks all over my living room floor is going to be driving a real truck on his own soon. 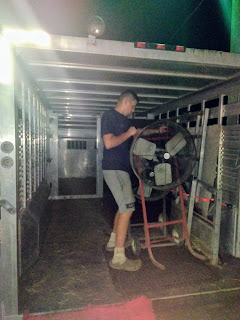 It is bitter-sweet, really, to watch your boy turn into a man.  It's pretty cool to watch him living out the real-life version of the things he used to pretend to do and dream about.  It's a privilege to have this front row seat allowing me to be involved in what he is passionate about.  It makes my heart ache a little to think about not driving him around anymore with him running the radio beside me and being his goofy self.  The thought of him leaving our home sooner than later puts my picture taking habits into overdrive and I fight the urge to hang on tighter than ever to him.  I know I can't, though.  I have to gracefully let him grow away from me and someday I'll even have to give up my front-row seat, I know. 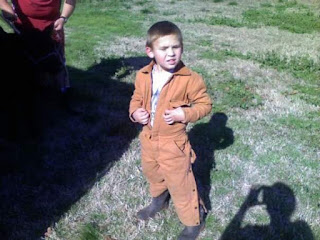 The coolest part, though, is how proud I am.  I wish I could take more credit for the person he has become, but so much of his temperament is just God-given.  The other parts I'm most proud of, I know have come from this life he has lived full of hard work and caring for animals who are completely dependent on him.  It has come from watching his dad meticulously work towards perfection in everything he does, whether it is working cattle hair, feeding, cleaning pens, or loading the trailer "just so."  Everything they do in the barn is done for a reason and has a bigger meaning contributing to an end result that takes patience, hard work, and perseverance.

But, that grin of his hasn't changed one bit, and somewhere in my mothers heart I will still always see him as that precious little boy loading a toy trailer, telling me all about his future plans. 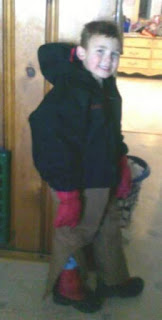