That feeling when your emotions overtake you and you are struggling not to cry. When you can't pinpoint the one emotion trying to erupt; you are just trying not to let it show on the outside. That's where I was yesterday, hearing the last part of the FFA Creed being read at the Hunger Challenge awards:

"I believe that American agriculture can and will hold true to the best traditions of our national life and that I can exert an influence in my home and community which will stand solid for my part in that inspiring task."

I think the biggest emotion I was experiencing was just plain old pride. This year in Oklahoma hundreds of young adults made the choice between cash in their pockets or giving show animals as donations to the Regional Food Bank of Oklahoma in order to make protein sticks for back packs to be handed out to food insecure children.

Think back to being a teenager yourself. When given that choice, would you have given away the animal you'd poured months of hard work into and spent hundreds of dollars of your own money on?  Now, would you have donated TWO of those animals?

Two senior girls from our chapter did just that without a second thought. Neither of these girls had the show year they had hoped for their senior year, and that's hard. They could have at least sold their pigs at market value and had a few dollars to spend on themselves to lessen the sting. However, these kids know the value of giving back.

These FFA kids have been raised in a culture where hard work, community, and service are valued above self and individual gain. The teen years tend to be a time when, developmentally, we are pretty focused on ourselves. I'm so impressed and proud to watch my children zip up their blue jackets and join a sea of blue corduroy where people practicing servant leadership, empathy, and civic mindedness are not the exception, but the expectation. 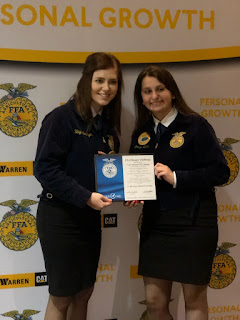 This year in our state we had 260 chapters who participated in the hunger challenge. There were 957 animals donated, totalling 1,532,200 protein sticks which will go to feed children in need. Imagine the difference that will make! Remember, these are youth making this difference. Imagine what they'll do as adults in our communities!

My oldest will unzip her blue jacket for the last time in just a couple of weeks. I know as I listen to these young adults recite the FFA motto in unison at State Convention, the words are not just things she says. These words have been infused into her character and she has learned to live life at a higher standard than most. For that, I'm eternally thankful.

"Learning to Do, Doing to Learn, Earning to Live, Living to Serve."
Labels: ffa