What is it about show season that turns me in to a mushy, emotional mess? (Well, more so than usual!) Yesterday my daughter won Grand Champion Swine at our local show. This may not be a huge deal for everyone, but for us it was MAJOR. I was, as usual, trying to capture every moment possible in a photograph.
This photograph, in particular, stood out to me. This is a picture of my ex- husband's girlfriend's dad. We found out not long after they started dating that her parents lived directly behind us - a couple of pastures separates the back of our houses.
Although my ex and his girlfriend have been together for quite some time and my children have met her parents and been around them quite a bit, and my husband had talked with him on several occasion, I finally met her dad this Winter when we were out back working with our pigs. (Actually, I had yesterday's makeup on and had literally JUST given a pig an enema but that's a whole different blog post!) He introduced himself and told me he didn't want things to be awkward given our situation. (You know, his daughter dating my ex-husband!)
I'm fairly certain I laughed out loud a little on that one. Our whole situation is so different from most. I don't feel the least bit of animosity or awkwardness towards my ex's girlfriend just because she's with him. The only thing that would ever cause that, for me, is the mistreatment of my children. I reassured her dad of the fact that it wasn't awkward at all, and that I was actually happy that his daughter was the choice he'd made in partner. We talked for a long time and he reiterated to me that our kids are welcome at their house any time and that we are free to use their pasture for our daily pig walking.
Yesterday at our local show my kids had quite the fan club. They had 3 sets of grandparents (yes, I said THREE), 3 sets of aunts and uncles, and a host of cousins. Also, my ex-husband's girlfriend's parents came and sat through almost an entire livestock show.
Yes, two of my children are a product of divorce. But, in the metaphorical pastures of their lives  I have tried so very very hard (although I know I have failed at times) to sow love and forgiveness. It's moments like yesterday when I watch them reaping so much love from all angles, I know my toil and sacrifices were worth it. When I watch other people "open their pastures" up to them, as well. The people who don't have to! Who have no obligation to. Yes, my kids saw some heartache at a young age, but God took it and restored them and has reaped on their heads a double portion of love. Just like I prayed He would so many years ago.
Instead of your shame you will receive a double portion, and instead of disgrace you will rejoice in your inheritance. And so you will inherit a double portion in your land, and everlasting joy will be yours.
Isaiah 61:7 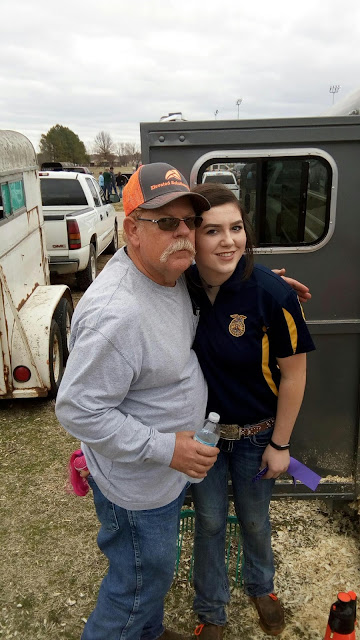