Last year we happened to meet up with a breeder who took a chance on our family.  Our goal for "Bubba," our son, was to finally get him into the premium sale at our County show. This kid had been working his tail off for years and never had made it.

I won't ever forget him being chosen for Reserve breed commercial heifer at our County show last year. That was such an awesome moment! Matt Lee, who raised the heifer, chewed Bub out after he won his class, because he just wasn't showing as well as he could have. Bubba cried, but he went right back in and he won that reserve breed title! Not only did Bubba make it into the county premium sale last year, he also made it in our regional premium sale. Matt felt bad for the "butt chewing" but we appreciated that he cared enough to correct Bub and to be there to watch him show.

I think that win is just what Bubba needed to boost him up and make him work even harder this year. His Showmanship has improved by leaps and bounds. Every time I've watched him go into the ring, I have been so amazed at how much he has improved. He even won the Intermediate Showmanship award at our local livestock show.

We bought another heifer this year from Matt. I would have to say the breeders and fitters are the unsung heroes of these cattle shows. Matt comes by our barn often, he puts up with all the many texts and phone calls from my husband asking him what to do with our heifer, and he sincerely cares about how Bub does at these shows. We buy calves from them, but then Matt also walks us every step of the way through the process of raising the calf up to be a great one!

Matt and his wife just had beautiful twins earlier this year. Anyone would have excused Matt from being at all our shows helping us clip and get heifers ready to go in the ring. However, I just left the OYE barn where Matt was finishing up his work for the day with many families who are showing there this year. I could tell by looking at his face and the gait of his walk he is utterly exhausted after who knows how many hours worth of clipping and fitting cattle.

This is a business, and we know that. We try hard to represent the Lee's show cattle business well when we are in the ring. However, it becomes so much more than a business when you have someone who genuinely cares about your success. Today I watched my son win his class at the world's largest Junior Livestock Show against 16 other heifers. I, then, watched him go back in the ring and win 3rd in his division out of a total of 55 heifers.  Matt has come alongside us and helped us go from being ecstatic about second place in a class at our County show, to winning a whole class at the state level. We can't thank him enough.

Anytime we do well at these livestock shows I have a hard time taking all the glory for it. There so many people who help us along the way.  Tonight as we stood and talked to Matt and I watched him joke around with my youngest daughter, congratulate my son, and make us all laugh even though he was so exhausted, I was so thankful for what his family has come to mean to our family over the past two years.

There will always be that business aspect to this livestock showing thing, and I really think it is great because I've watched my children learn so much through it. However, there is also the family aspect where you find people along your journey and they become part of the fabric of your life. And, I have found, that some of the BEST people can be found in the barns at a livestock show! 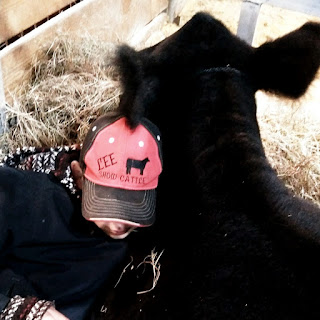 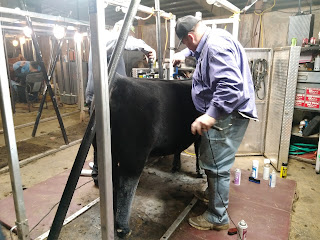